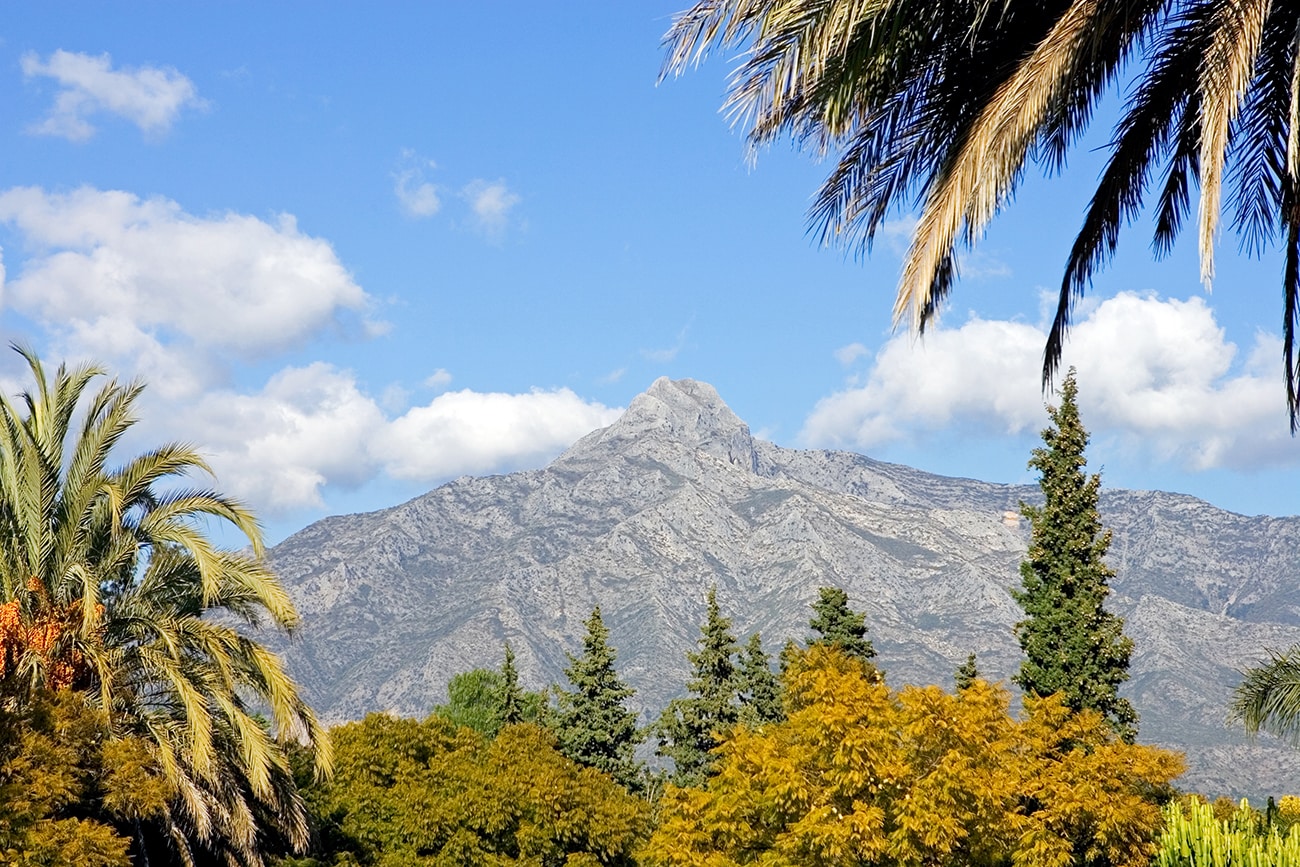 In the first of three articles walking guide and author Guy Hunter-Watts chooses one of his favourite hikes in the mountains close to Marbella, an ascent of La Concha from the Refugio de Juanar. The walk is one of 40 described in his book Coastal Walks in Andalucía

Immediately to the north of Marbella, at the southern tip of the Parque Natural de la Sierra de las Nieves, the Sierra Blanca is associated in most people’s mind with one emblematic mountain: La Concha. Wherever you are on the stretch of coast between San Pedro and Marbella its gracious, shell-like southern face rises like a multi-layered cake, providing a stunning backdrop to the villas that dot its lower slopes. Like the rest of the Cordillera Penibética of which it forms a part, the mountain is predominantly composed of limestone which has been metamorphosised into alternate strata of grey and white marble, conferring its banded aspect when seen from the south. 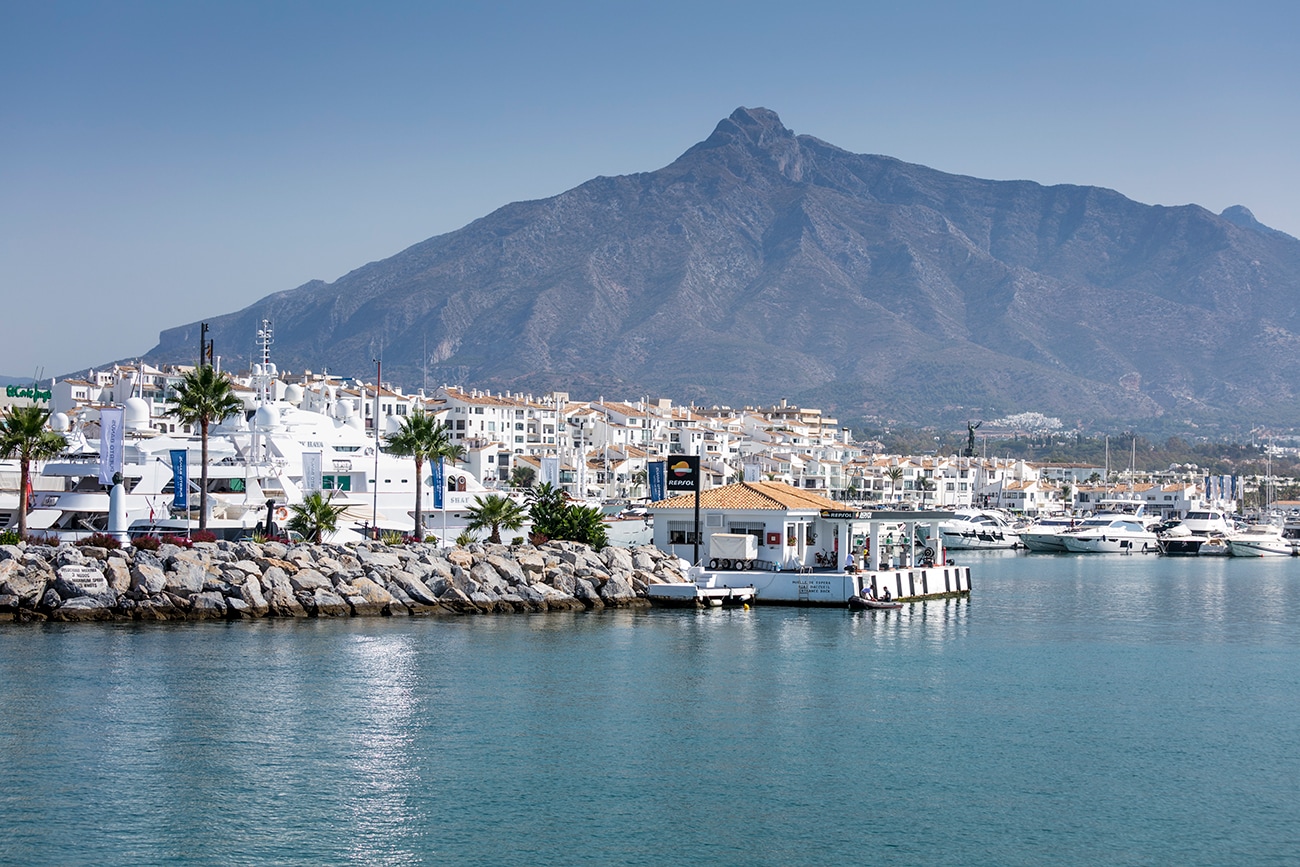 Behind La Concha’s denuded, sea-facing slope a more verdant swathe of sierra stretches between Istán and Ojén and north and south from the former hunting lodge of the Refugio de Juanar. Stands of repopulated pines, ancient groves of olives, almonds and chestnuts are interspersed with forest of holm and cork oak along with two small stands of Spanish firs. In spite of its proximity to the coastal towns and villages, this is wild and rugged terrain: it’s easy to see why groups of republicans were able to fight on against Franco even when the Civil War had officially ended, retreating from the Nationalist troops to the refuge of Sierra Blanca’s dense forests and deep gorges.

Many of the traditional resources of the sierra are no longer exploited: charcoal from its oak trees, talcum powder, marble, iron and magnesium from its mines and quarries, esparto grass and fan palm for basket manufacture, whilst the groves of olives that were once worked around the Cortijo de Juanar lie abandoned.

The farm has been reborn as a centre for research into the Spanish ibex (Capra hispánica) whose numbers have multiplied since they were declared a protected species: on any walk that passes close to Juanar you’ll spot them on the higher rock faces. Other mammals present in the sierra include roe deer, foxes, badgers, genets and Egyptian mongooses. Raptors are easy to spot, the sierra being home to several types of eagle, griffon vultures as well as to hawks, kestrels and a variety of owls. An extensive network of hiking trails criss-cross the sierra but none are quite as thrilling as the one leading up to the summit of La Concha.

The ascent of La Concha

The classic route up La Concha approaches the peak from its northern side, departing from El Refugio de Juanar: this former hunting lodge, now a hotel, is a wonderful place to overnight or have a meal after the walk. From here the walk leads along a flat-bottomed valley before you climb steeply through pine forest towards the Cruz de Juanar. After crossing a col you follow a ridge for most of the way to La Concha. On this section you’ll occasionally feel safer using hands as well as feet but so long as you have a reasonable head for heights you shouldn’t find the walk intimidating.

The views on a clear day from La Concha’s summit are mesmerising, encompassing a huge sweep of the coast, Gibraltar, the Rif mountains of Morocco and the high peaks of the Sierra Nevada.

Getting to the beginning of the walk

From the A7 motorway exit for Marbella/Ojén on the A355. Continue on towards Ojén via two roundabouts. Passing by two turnings off right towards the village cut left from the A355 at a sign Refugio de Juanar along the MA5300 which you follow all the way to the Refugio.

The walk begins at the entrance of the car park of El Refugio de Juanar. From here descend 100m to a junction then turn right at a sign Mirador. Looping up through the pines you reach a parking area then pass a green metal gate. Passing by a sign pointing left towards Ojén continue along the track following a sign GR243.1 Istán. Head on along the eastern edge of a flat- bottomed valley where an abandoned olive grove is bordered to both sides by thick stand of pines. Passing a ruined stone hut you reach a sign for PRA-168 La Concha (25mins).

Here cut right away from the track towards the fence of Cortijo de Juanar then angle hard right down through an olive grove for 100m to a 4 way junction. Cutting left into a stand of pines you come to a 3 way junction. Here angle left following another sign PRA-168 La Concha. The pines thin out as the path becomes sandier and climbs more steeply: you’ll soon see a fence running to your left. To your left the Cruz de Juanar is visible as you climb on up the left side of the valley.

Reaching the top of the ridge and Puerto Las Allanes head straight on for a few metres then angle right and continue along the ridge, heading west through juniper and low-growing oaks. Views now open out to the south and to the Mediterranean. Having run just left of the ridge the path cuts up right to its highest point and passes a large cairn (1hr 25mins) before descending for a short distance, now just north of the ridge. Cairns mark the way as well as PR waymarking.

Angling slightly left the path passes beneath the steep cliff face of El Salto del Lobo, where there are steep drops to the right: care should be taken on this section. Zigzagging steeply up left (a hands-on approach at this point will be useful) it then drops back down to a more level path which runs on towards La Concha. Climbing back to the top of the ridge the sea again come into view as the path angles right, adopting a southwesterly course. Cairns and PR waymarking still mark your path as you head on just south of the ridge before angling back up to the top of the ridge (once again you may feel safer taking an occasional hand hold) as you pass round the south side of the Cerro del Lastonar. A vast panorama opens out to the south as as you reach a cairn where you’ll see blue and red stripes on a rock. At this point you’re a few metres higher (1275m) than the official summit of La Concha, at the highest point in the Sierra Blanca.

From here angle down left following cairns and red and blue waymarking, sticking close to the ridgetop. The Istán reservoir comes into view to the west. The path runs a few metres beneath the ridge, on its southern side, before cutting up to a 3 way marker post (2hrs 10mins). Here carry straight on following a sign La Concha 15mins along the ridge to a large cairn. Here the path angles right, descends, then picks up the continuation of the ridge before climbing steeply once more. Red and blue flashes still mark the way and lead you up to the summit of La Concha (1215m) (2hrs 25mins). It’s worth continuing on along the ridge for 200m to the southern edge of the Concha to a large cairn from where the views down to Marbella are even better. A trig point here marks 1203m. After gulping in the amazing panorama retrace your footsteps back to the Refugio de Juanar (4hrs 40mins).

Guy Hunter-Watts is the author of Walking in Andalucía, The Mountains of Ronda and Grazalema, The Andalucían Coast to Coast Walk and Coastal Walks of Andalucía. All books are available via Amazon or his own website www.guyhunterwatts.com which also has details of his guided walks in the Grazalema Park.