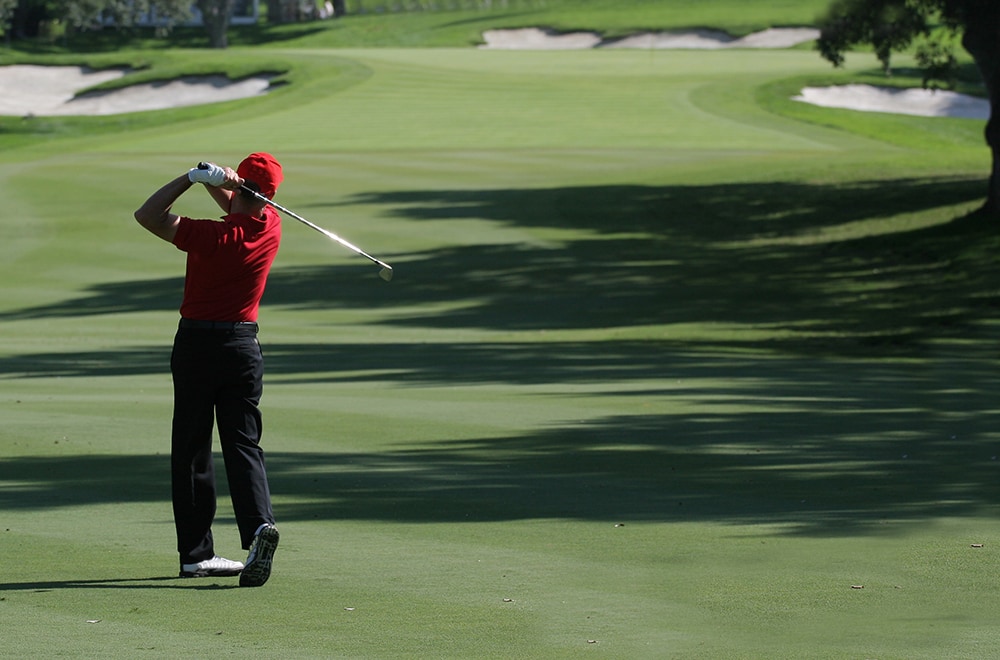 The Open de España (October 3 – 6) marks the start of the golfing season in Spain. Giles Brown previews the tournament and some of the big names competing, and picks out some of the top classic courses in Andalucía.

Football may make the front pages, and tennis and motorsport get a look in when a Spanish competitor wins something, but golf stirs the passions of the Spanish fan in a way that few other sports can. Maybe it’s the swashbuckling style of the legendary Seve Ballesteros, who took on the game like a contact sport. Perhaps it’s the raw emotion when he inspired the European team to pull off an incredible victory in the Ryder Cup at Valderrama in 1997. Or it might be the sheer elation aficionados felt when Sergio Garcia, so long the “nearly man” of golf, finally won The Masters at Augusta in 2017, one of the greatest prizes of all and donned the famous green blazer.

The patriotism and passion of the Spanish golf scene will be on open display at the Spanish Open Golf European Tour Tournament, which takes place between October 3-6.

Held once again at the Club de Campo Villa de Madrid, 156 players are set to participate in this annual fixture that traditionally marks the start of the Spanish golf season. Among the big names competing for the €1.5 million prize fund this year will be former winners John Rahm (2018), Andrew Johnston (2017), James Morrison (2016) and the ever popular, cigar smoking, Miguel Angel Jimenez (2015).

The Open de España was held last year at the National Golf Centre, also in the heart of Madrid, when 50,000 spectators roared on Spanish golfer Jon Rahm to victory over the four days of the championship. The massive public success has led to the championship returning to the capital as part of the European Tour schedule in 2019 season.

The Madrid course, located in the heart of the city, has already held three European Tour championships including the 2007 Open de España, which was won by Charl Schwartzel, and the 2009 Madrid Masters, won by Ross McGowan.

Established in 1929, the Club de Campo Villa de Madrid is not only one of Spain’s oldest courses but is also one of the most imposing. The main course – known as the Black Course – hosts regular European Tour events and was designed by Javier Arana, widely recognised as Spain’s most brilliant golf course architect.

The Yellow Course: this is one that anyone wishing to play golf in Spain must try. Nine of the holes were designed by Javier Arana, with the others the work of the legend that was Seve.

Several big names are scheduled to play in this year’s Open de España, among them defending champion Jon Rahm. This exciting 24-year-old, from Barrika in the Basque Country, is currently in the PGA rankings top 10. As an amateur he held the number one ranking for a record 60 weeks before turning professional in 2016. Jon will be back to defend his title in a great run of form that has so far seen him take his fourth win in the European Tour at the DDF Irish open. To top it all off, at just 24, he’s become the youngest European golfer to reach four wins in the Tour in the last 40 years. What’s more, with this win, he is now first in the Race to Dubai, a feat which no Spanish golfer has achieved since Seve Ballesteros.

“I will be returning to the Club de Campo Villa de Madrid, which is a great course with a beautiful design,” said Rahm “It’s a course with a lot of history. Madrid is a city that is full of sporting history. It’s an iconic city for European football, tennis and many other sports. And I hope that golf will also be one of those icons.

“It’s an honour for me to return and defend my title and it’s always an honour to come to Madrid. In my heart it will always be both a city and special event for me to come back to.”

Another golfer who is sure to be a firm favourite with the passionate and partisan crowd is Sergio García. “El Niño”, who won the tournament in 2002, is best known for his victory at The Masters at Augusta in 2017, as well as his heroic exploits at several Ryder Cups, having played an incredible nine times! García last competed in the Open de España in 2016, finishing third, when the tournament was held at the magnificent Valderrama course. The prospect of these two top Spanish golfers, Rahm and García, going head to head in Madrid is mouthwatering to put it mildly!

If all this talk of golfing glory has you itching to grab your clubs and head out to the nearest green, you are spoilt for choice on the Costa del Sol. It isn’t called the Costa del Golf for nothing, with a range of courses of all styles to challenge any golfer, whether you are a smooth operator or more of a weekend hacker!

The most famous is Valderrama, the scene of Seve’s emotional Ryder Cup triumph in 1997. Set in beautiful Andalusian countryside, golfers talk of its beautifully maintained greens in hushed and dreamy tones. It’s a course that every golfer should play once, if only to say that he’s walked the same fairways as Tiger Woods, Nick Faldo, Sandy Lyle and practically every other golfing great.

Nueva Andalucía is otherwise known as “The Golf Valley” and is home to two classic golf courses. La Brisas, founded in 1968, was one of the first in Marbella, and if you search around on the Internet you’ll find footage from the early 70s of the course standing in splendid isolation with only a few villas overlooking the manicured fairways. How times have changed. Las Brisas also hosted the Spanish Open on several occasions, the last time in 1987 when Nick Faldo was victorious.

Bordering Las Brisas is the perennially popular Aloha Golf Club. A firm favourite with residents and visitors alike, Aloha recently underwent a complete refurbishment, making it one of the most stylish clubs on the coast. But it also boasts a fascinating history. Formula One World Champion and famous playboy James Hunt was a regular in the 70s and trained his beloved Alsatian Oscar to fetch the balls that he had sliced into the rough. Oscar was eventually granted honorary membership of Aloha, on the grounds that he was often better behaved than the other members!