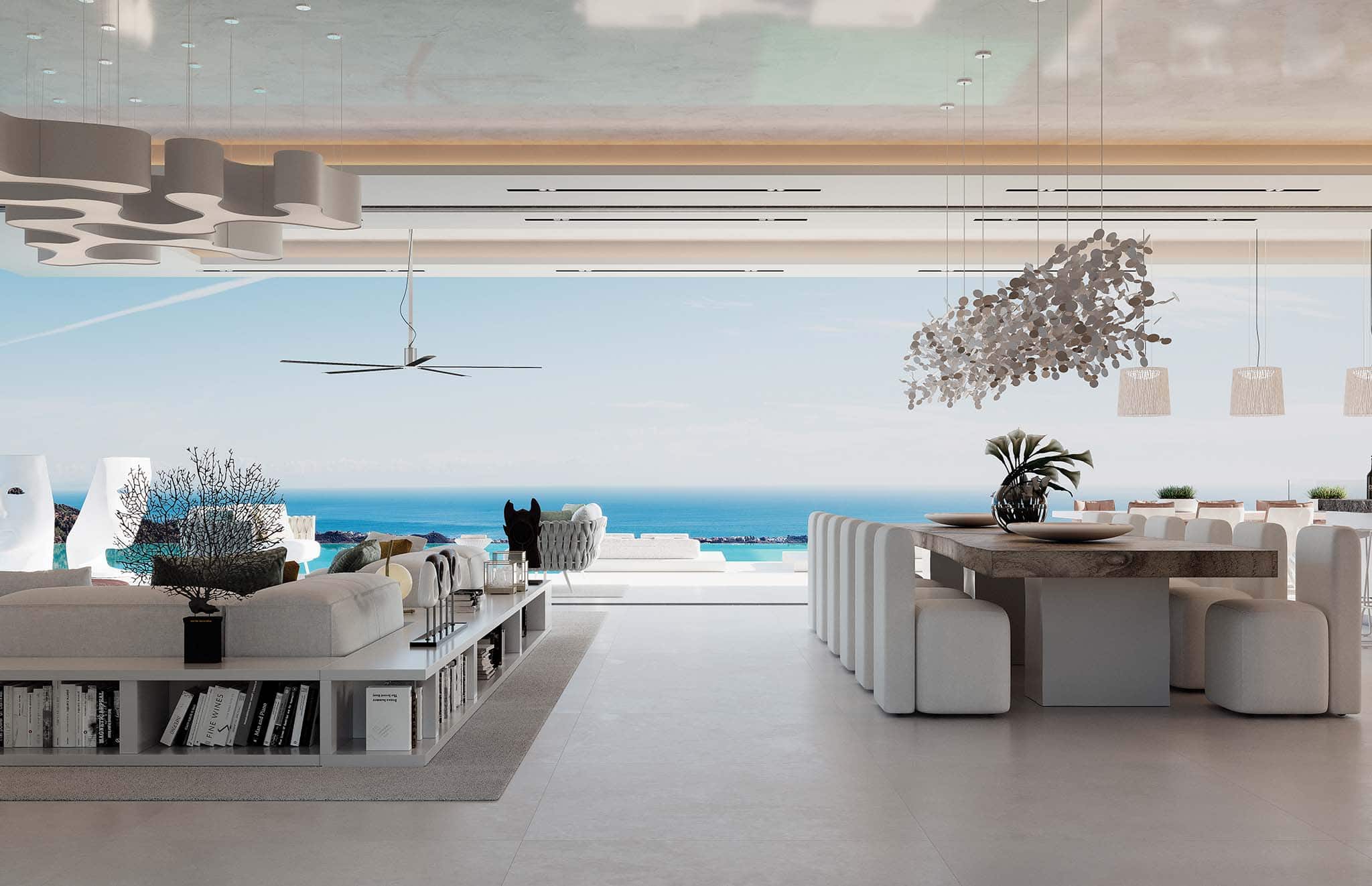 Vista Lago Residences comprises 18 design-led villas in one of the most perfect locations in the world. Overlooking a lake and the Mediterranean Sea beyond, with views of the Rock of Gibraltar and Africa; surrounded by beautiful mountainous terrain that does not obscure the sun, within short driving distance of the largely uninhabited hinterland leading up to Ronda but not more than 15 minutes drive to Puerto Banús and the other stylish urban centres along the coast, this is an exceptional location in an exceptional part of Southern Europe.

With the emblematic La Concha Mountain on it’s left and the green wooded hills of the famous La Zagaleta Resort and Country Club to the right, Vista Lago Residences is situated on one of the highest south-oriented plots of El Real de la Quinta. Residents will benefit from the amenities offered by the community, including a large lake, pools, restaurants, boutique hotel and an executive golf course.

It’s all about the design 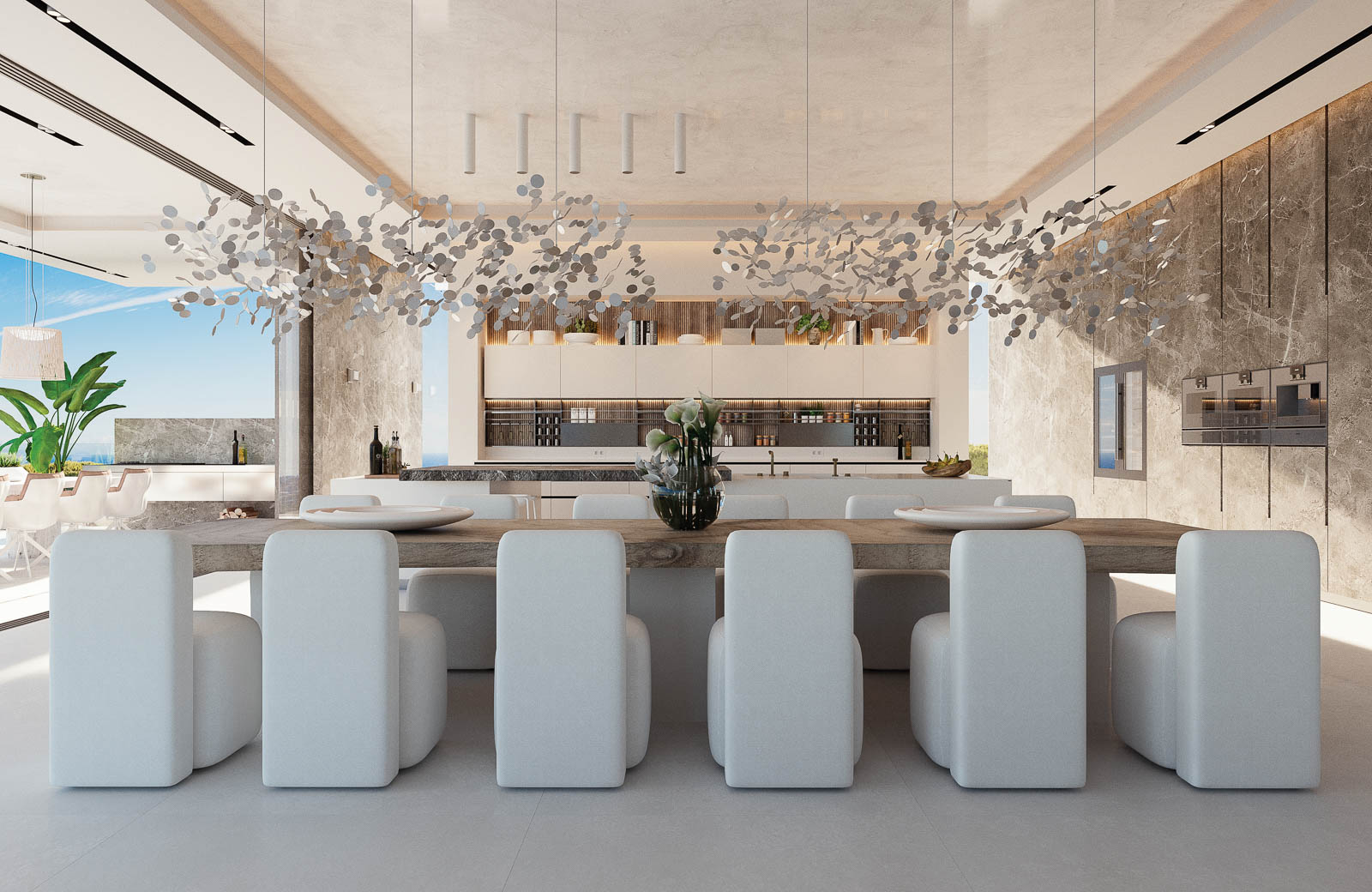 Design is the key word for Vista Lago Residences, and it goes well beyond the design of each actual house. All are designed, as would be expected in such a luxury development, to the highest standards of material and construction, but here, design means a lot more. It means designing for a way of life, for clients who are familiar with, and expect, the best things that life can offer. Exceptional design for exceptional people, because choice of living space defines the individual.

The concept is holistic, to the extent that the furniture within has been designed specifically to suit its immediate surroundings. In these villas, all parts of the whole, such as the stairs, are designed as works of art that complement the whole, and absolutely everything has been designed from the start. 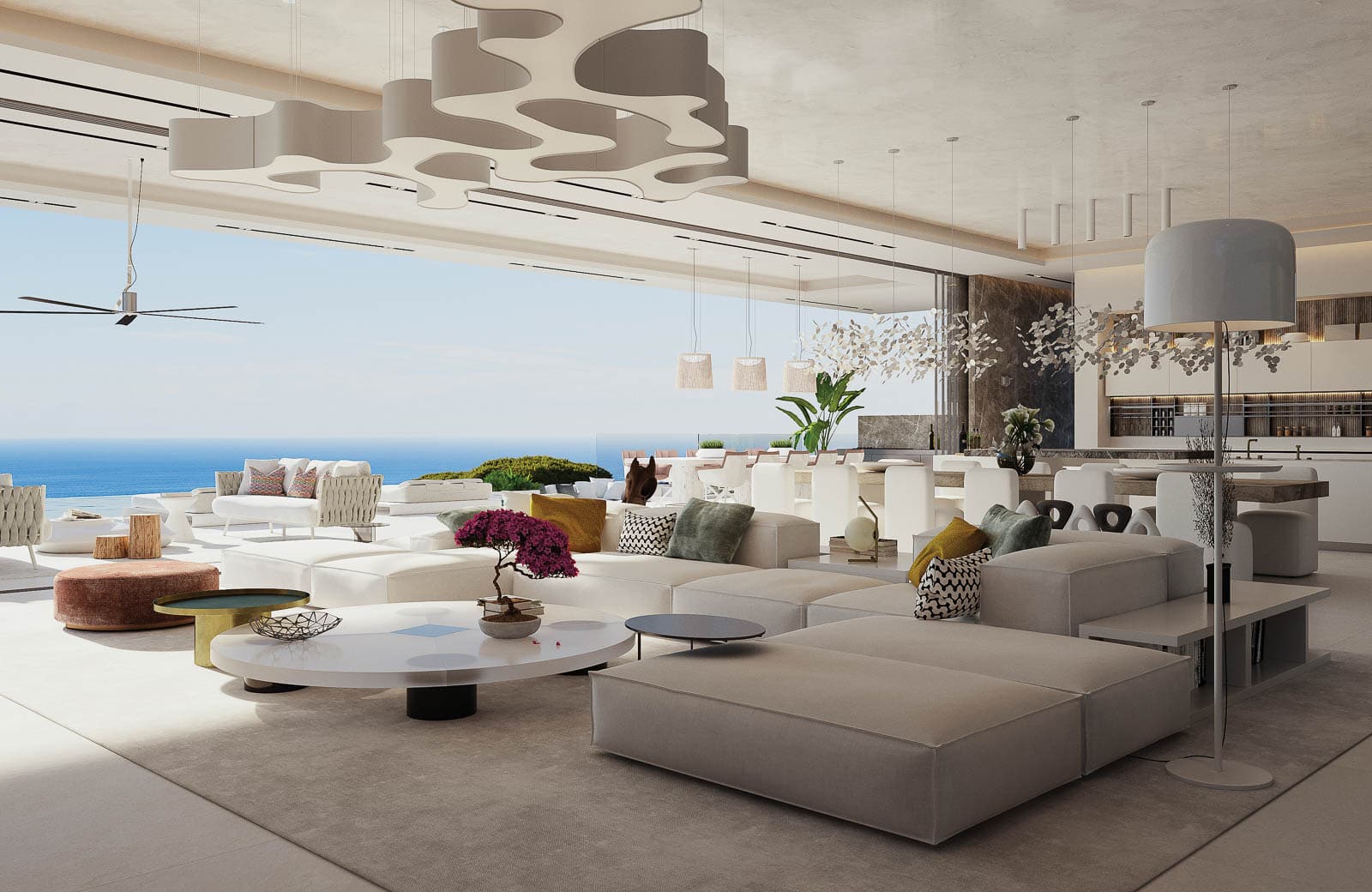 The lounge is the first surprise, because the entrance is actually a glass-sided hallway running into the lounge, a transitional area with no visible doors or walls. Seating is on the left, dining on the right, and the views over the infinity pool to the Mediterranean are what it is all about. The jagged sculptural stairway by the entrance complements the flowing shapes of the magnificent ceiling lamp, while the sculpture figures (The Visitor by Gardeco) chat eternally under the stairs like a group of Andalusian villagers.  Artwork choices are not accidental for Bright developments. The design team has paid an equal amount of attention to the selection of art for each villa as they have done for the designer furniture. Subtle but irreplaceable, art is found everywhere – in the form of paintings, murals, and even lighting.

The kitchen has been designed as a supremely functional space that allows the user to forget quickly that he or she is actually in such a space, but rather in a beautiful – and workable – environment. With the cooker facing the sea and a few steps away from a large oak dining table custom-made by UDesign, the kitchen area does not feel like a chore – it’s a beautiful space spend time in.

Bringing the outside inside 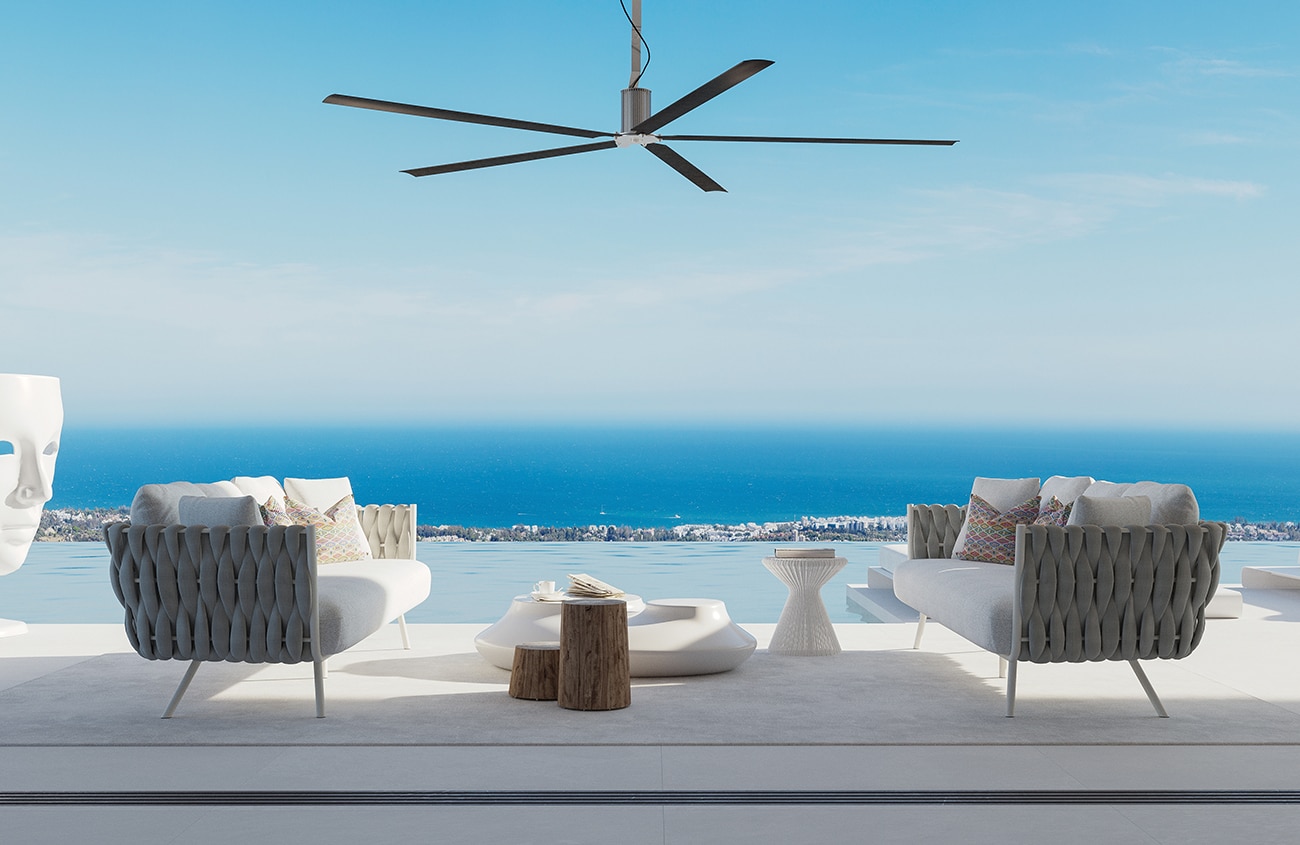 The outside/inside concept continues throughout the house, largely due to the all-glass exterior walls wrapped around the front and sides. In key parts of the house, both at ground level and upstairs, the windows disappear into the walls, ensuring perfectly clear views outside and bringing the outside in. The villa also has its own garden gym & spa with water fountain, Jacuzzi, spa and massage table.

The TV area uses details in natural wood to distribute visual attention rather than focus it on the television set in the wall, its modern fireplace adding to the feeling of a room designed for more than simply watching television. The pool outside wraps around the corner, meaning one can also read surrounded by water, and once again, without being fully aware of the border between inside and outside. 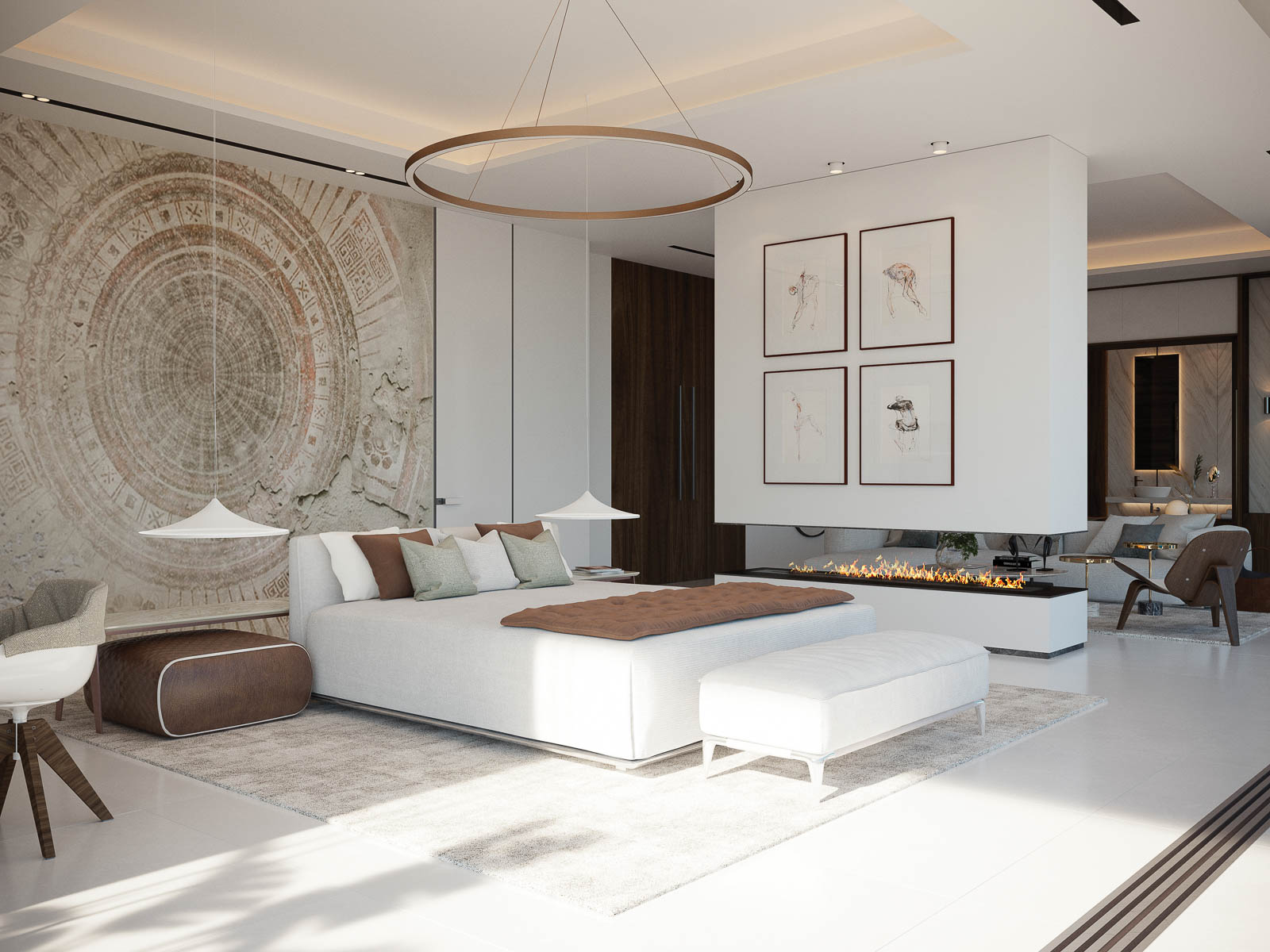 The master bedroom… is an under-statement. This is so much more than a space for sleeping in, it’s more like a suite in a six-star hotel. A floating open fireplace separates the sleeping area from the TV area without breaking the line of communication between the two, while the windows disappear into the walls at the touch of a button. With an ample terrace leading off it, this suite offers spectacular views over the sea, while the personal lounge area has been cleverly designed to be both an integral part of the bedroom suite and partially separated from it. The master bathroom has been designed as a kind of spa, as luxurious and visually pleasing as every other part of these exceptional houses. You can be in a tub and be outside at the same time, as if you teleported to your favourite resort in Bali or Mauritius.