Top 5 places to discover on the Ronda Road

Andalucía is not just about the beaches – venturing into the hinterlands will leave you in awe of picturesque sceneries and memorable views. The famous pueblos blancos (white villages) are traditional Spanish villages usually located on hilltops with narrow cobbled streets, a dreamy reminder of a days gone by. We have chosen five of these pueblos to discover on the road to Ronda, which in itself is a must-see, with its Game-of-Thrones-style architecture and dramatic backdrops. 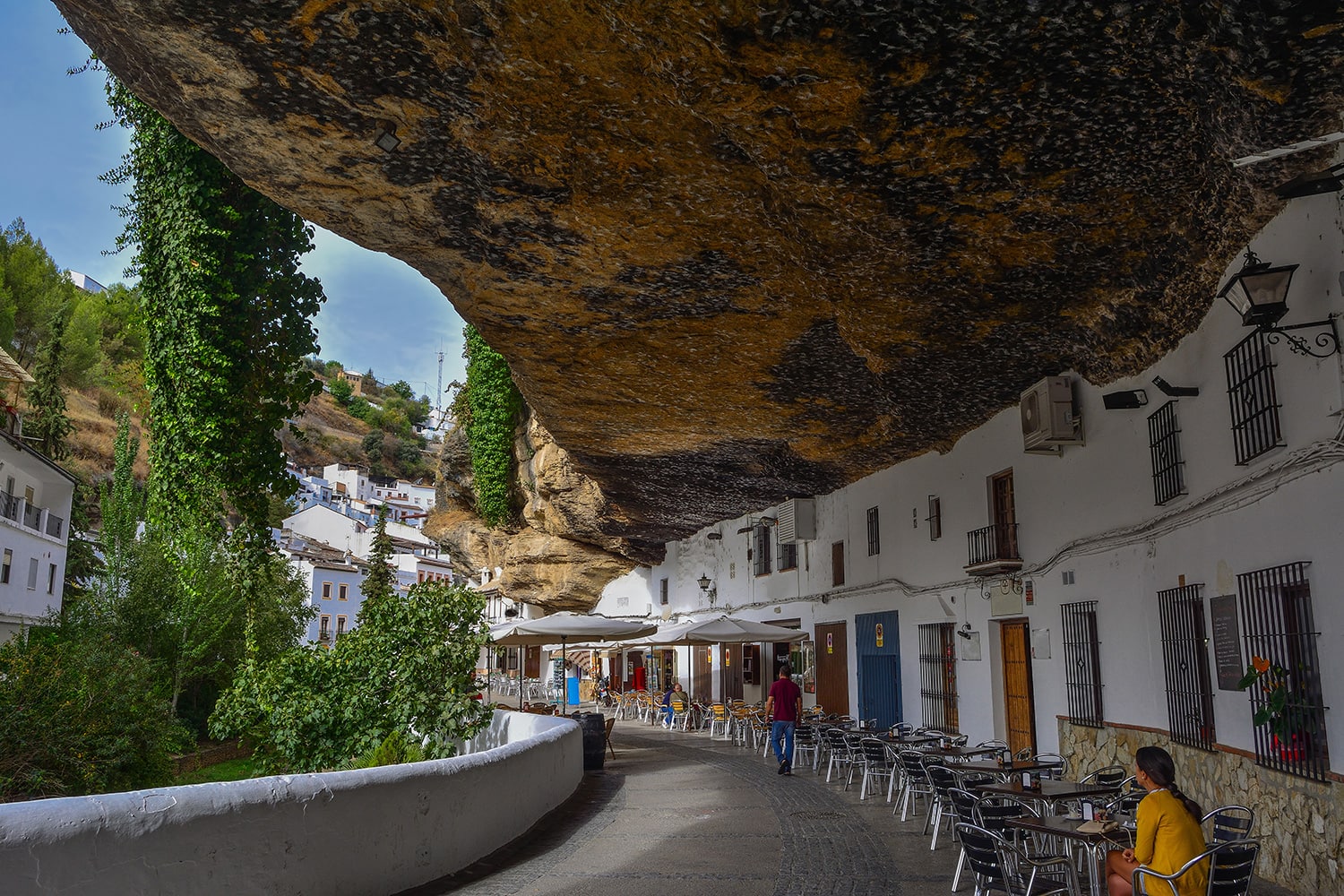 Setenil de las Bodegas is a small village with a population of around 3,000 inhabitants. Its average altitude is 640 metres and it sits 134 km from the capital of its province, Cádiz. Unlike most pueblos blancos it’s not built on a protective cliff, it grew out of a network of caves above the River Trejo and the bright white houses are built right into the cooling rock cliffs with the result resembling something out of Lord of the Rings. The castle sitting at the highest point in the village was once an Arab fortress. Named for its extensive vineyards that were wiped out by disease in the 18th Century, its farms now provide Ronda and the surrounding area with a large proportion of their fruit and vegetables. The most representative product of Setenil gastronomy however (and their economy) is extra virgin olive oil – buy a bottle to take home, it’s delicious! 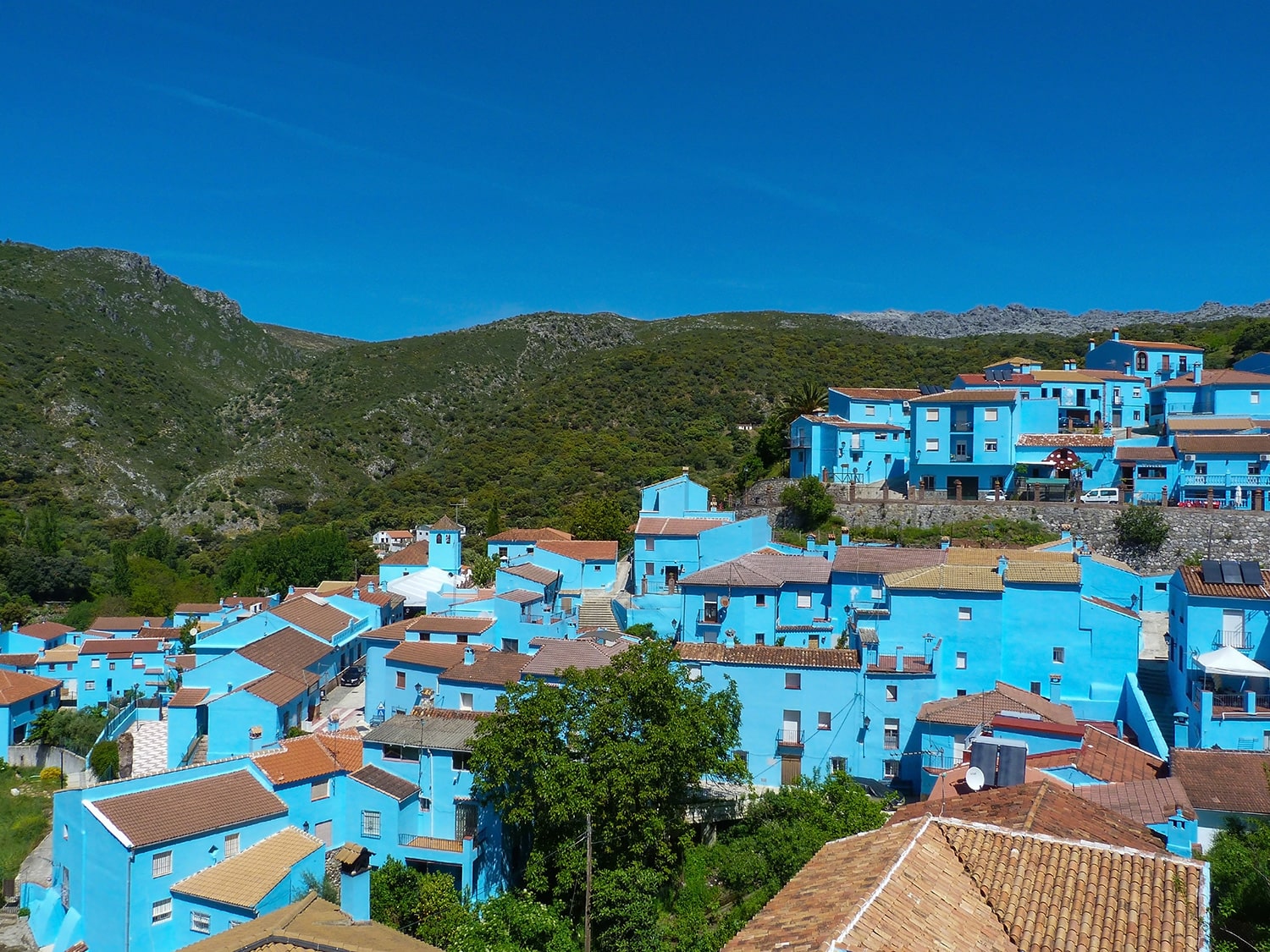 Júzcar is located in the Valle del Genal in the Serrania de Ronda, just 22 km from Ronda itself. These days it’s more commonly known as The Village of Smurfs. In Spring 2011, all the buildings in the village, even the church, were painted smurf-blue by Sony España to celebrate the premiere of the Smurfs movie. An incredible 4,000 litres of paint were used! Although the promotion ended in December 2011 the villagers voted unanimously to keep the blue colour because it was such a boon to the economy with 95,000 visitors arriving in the six months following the paint job. For a town that usually sees 9,000 tourists every year this is quite impressive! Other things to see in the village include the 16th Century church, the Cave of the Moors and the ruins of a tinplate factory situated right by the river, Finca La Fabrica. Local arts and crafts to buy include the famous espadrilles (straw sandals), jugs and other containers made from straw and cork. 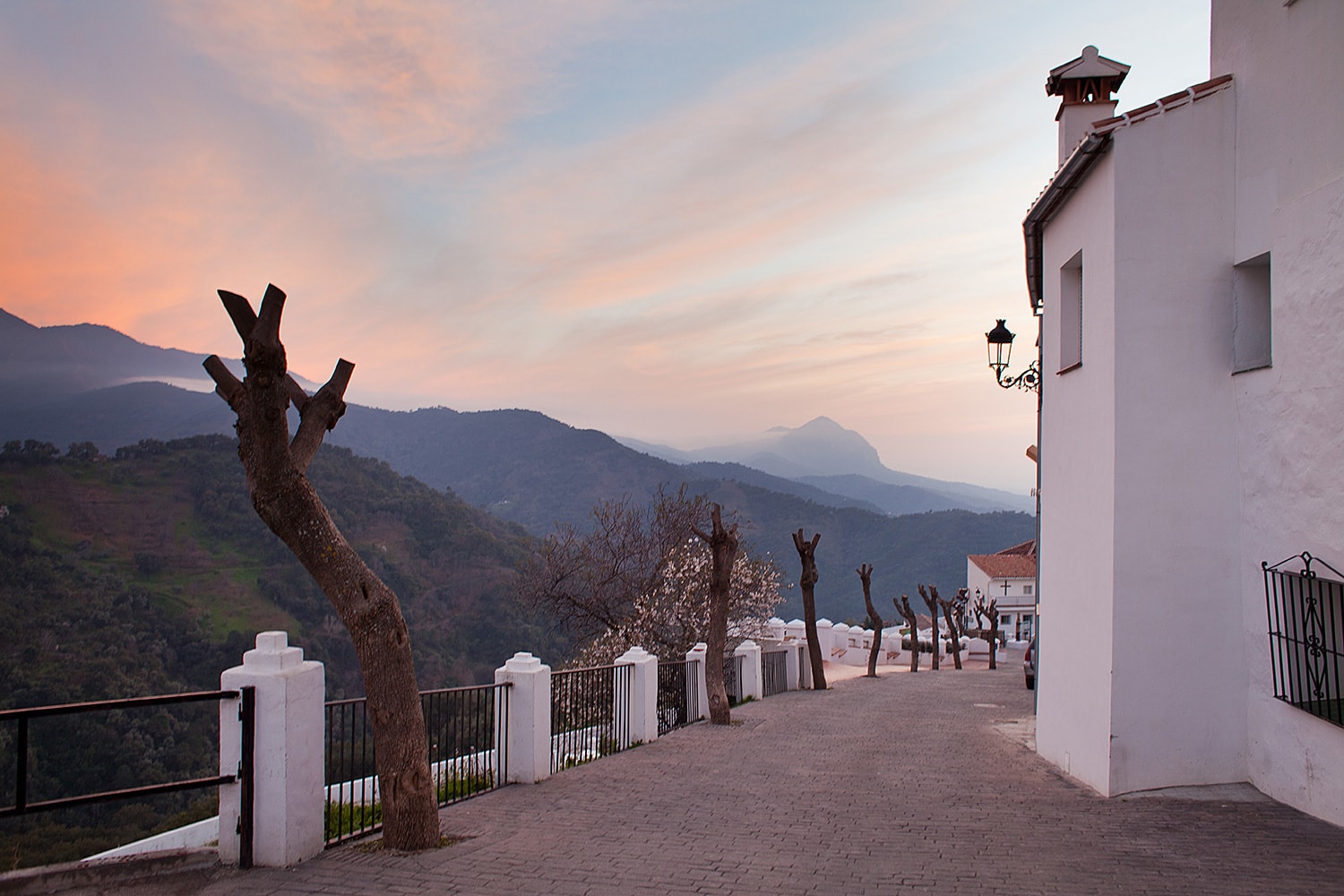 Genalguacil is a tiny village of approximately 500 inhabitants located 45 Km from Ronda and 34 Km from Estepona,  the natives are known as Genalguacileños. This is a village that art lovers will not want to miss. Prize-winning contemporary works of art are on permanent public display throughout the village as a result of the bi-annual art festival called Los Encuentros de Arte del Valle del Genal (the next one to be hosted is scheduled for August 2020). Rather isolated, Genalguacil is perched above the Genal River Valley and surrounded by one of the only pinsapo pine forests in Spain. Things to see whilst you’re there:

Church of San Pedro de Verona, originally built around 1570 and restored many times.

Plaza de la Constitución – beautiful in the morning and in the evening when views of the neighbouring villages of Benarraba and Algatocin are at their best. 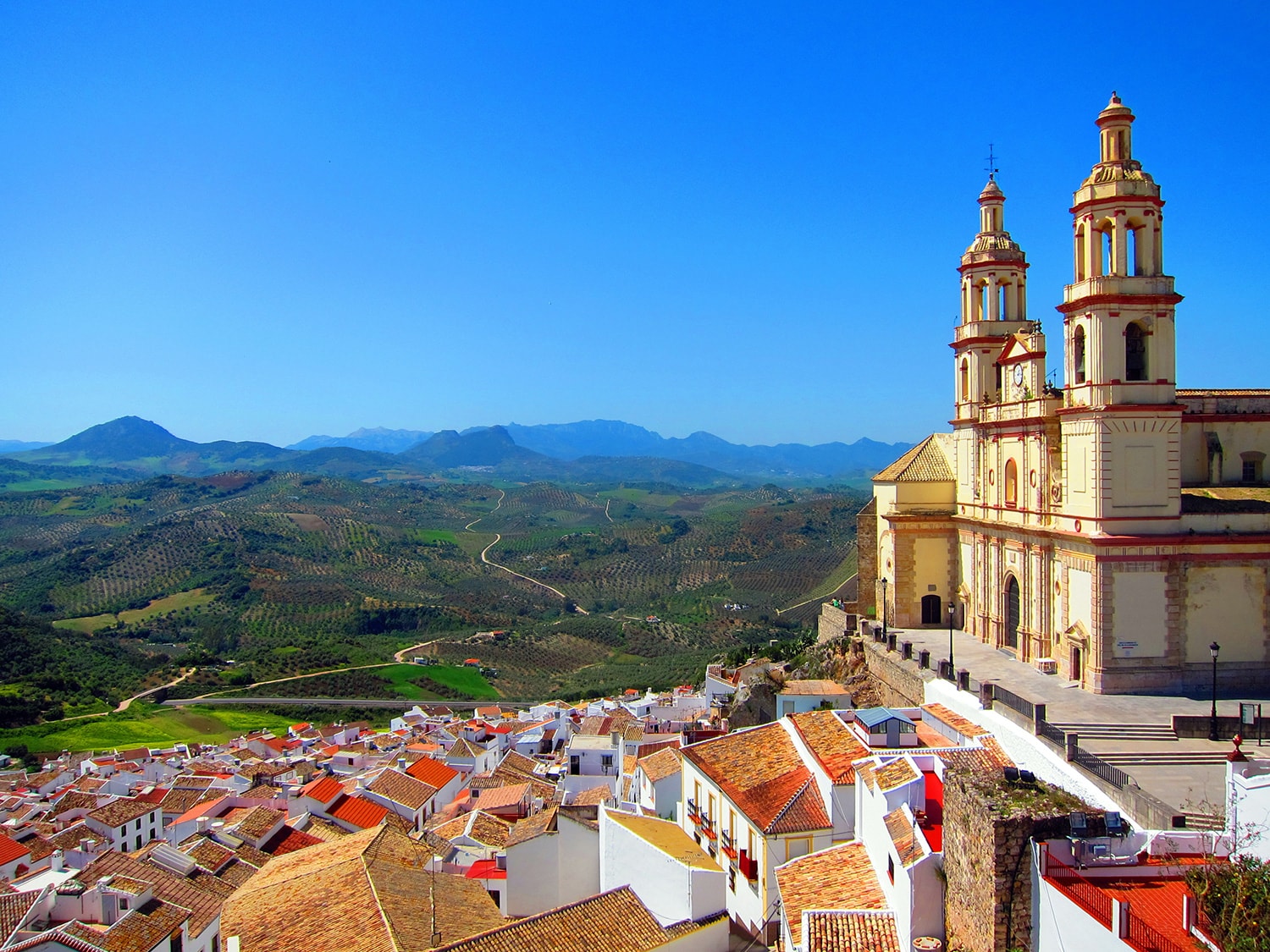 The impressive Moorish castle of Olvera was built during the late 12th century to defend the border of the Nasrid Emirate of Granada against the Kingdom of Castile, and the medieval town of Olvera grew up around it. The hills surrounding this white village are full of olive groves – 2 billion of them in fact – and the oil they produce is said to be the best in Andalucía. The town now supports more family-run farming cooperatives than anywhere else in Spain. There are so many sights to see in this town – the Arab castle, the Moorish wall, the Casco Antigua (old town), La Plaza de Andalucía (also called La Alameda– tree lined area), el Peñón del Sagrado Corazón de Jesús (the Rock of the Sacred Heart of Jesus – a rock garden full of flowers, birds and animals), El Santuario de Nuestra Señora de Los Remedios (The Sanctuary of Our Lady of the Remedies – 2 km from the town centre) and El Monasterio de Caño Santos (a majestic restored monastery located 7 km from Olvera). There’s also a gigantic rock outcrop 14km to the northwest of the town centre, Peñon de Zaframagón, which has a huge colony of griffon vultures. Until the mid-19th century it used to be a bandit refuge, there is even a famous Andaluz saying: “Kill your man and flee to Olvera!” 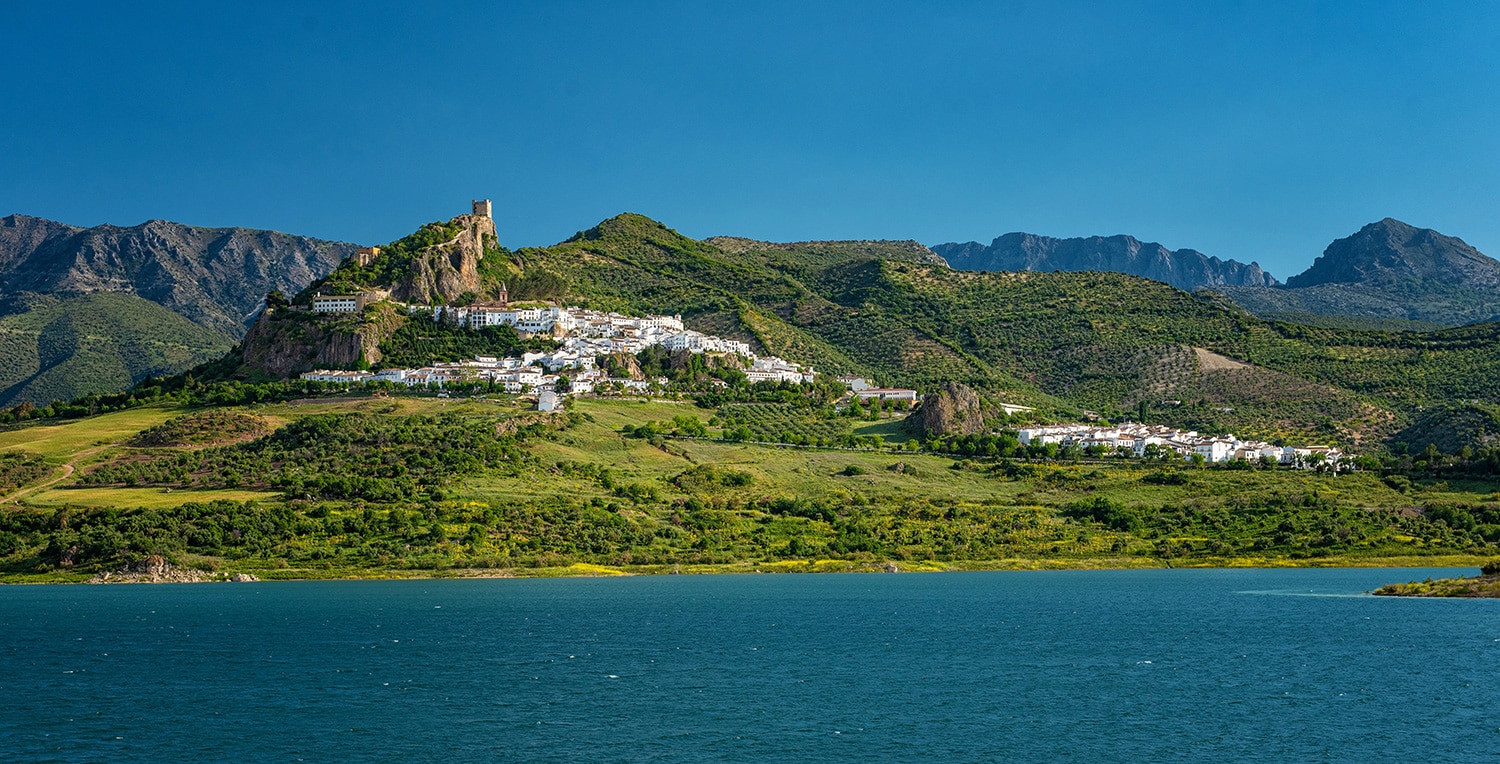 Grazalema, situated within the Sierra de Grazalema Natural Park, is famous for being the wettest place in Spain. This stunning region of natural beauty, popular with hikers, is dominated by the awesome rocky outcrop known as Peñon Grande– you won’t be able to take enough photos of this incredible backdrop to the village. The village was established in Moorish times by Berber settlers who felt right at home in these mountains which were so similar to their homeland. A unique microclimate allows for a huge range of flora to flourish here, including pinsapo, the Spanish fir, which is considered the Andalusian National Tree. On arrival head for the Plaza de España where there are a plethora of bars and restaurants and make sure you buy one of the famous mantas de Grazalema– woollen blankets that have been made in the village since before the 1400’s. Other locally produced items to buy are leather goods, baskets, honey, cheese and wine. If you visit during the summer time make a point of cooling off in the local pool (on the eastern edge of the village) where you have a fabulous view over the Sierra.