Bright on Boats: a guide to the marinas around Marbella 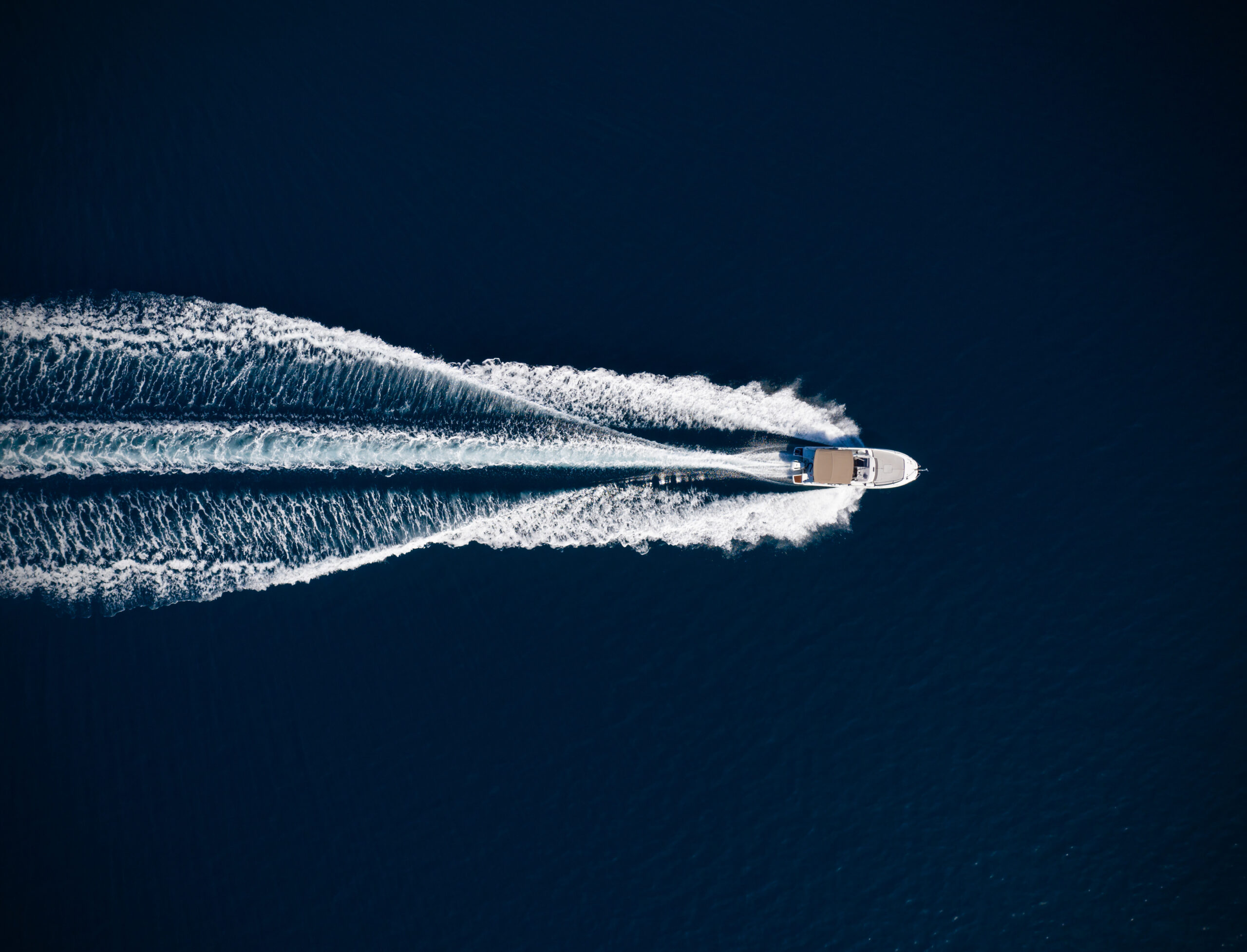 There really is nothing to beat messing around on boats. Prince Phillip once famously described sailing as being “the only sport that one can do with a hangover”, and the floating gin palaces that you see in the marinas along the coast have housed more than a few hangovers in their time.

Boating and the Mediterranean lifestyle fit together perfectly. Nothing beats heading out of port on a beautiful day. Dolphin spotting, waterskiing, catching a few rays on deck or mooring up off a beach club and letting their tender pick you up are all options, while the more adventurous can cross the Straits to Morocco or head to Gibraltar, always a day trip with a difference!

Whether you have an ocean-going superyacht, a serious sailing craft, souped-up speed boat, or a dingy that has seen better days, you will find a marina that meets your maritime dreams.

And be careful on the water. This writer once badly misjudged his maritime mooring skills, stuck his boathook in the wrong place at the wrong time and ended up being catapulted from the back of a cigarette boat – piloted by a beautiful blonde – headfirst into Puerto Banús. Not so much the walk of shame as the swim of shame as I had to breaststroke to the nearest ladder to much laughter and applause from the quayside crowds. My yacht fox companion wasn’t impressed, and I was hosed down in public before being allowed back aboard! 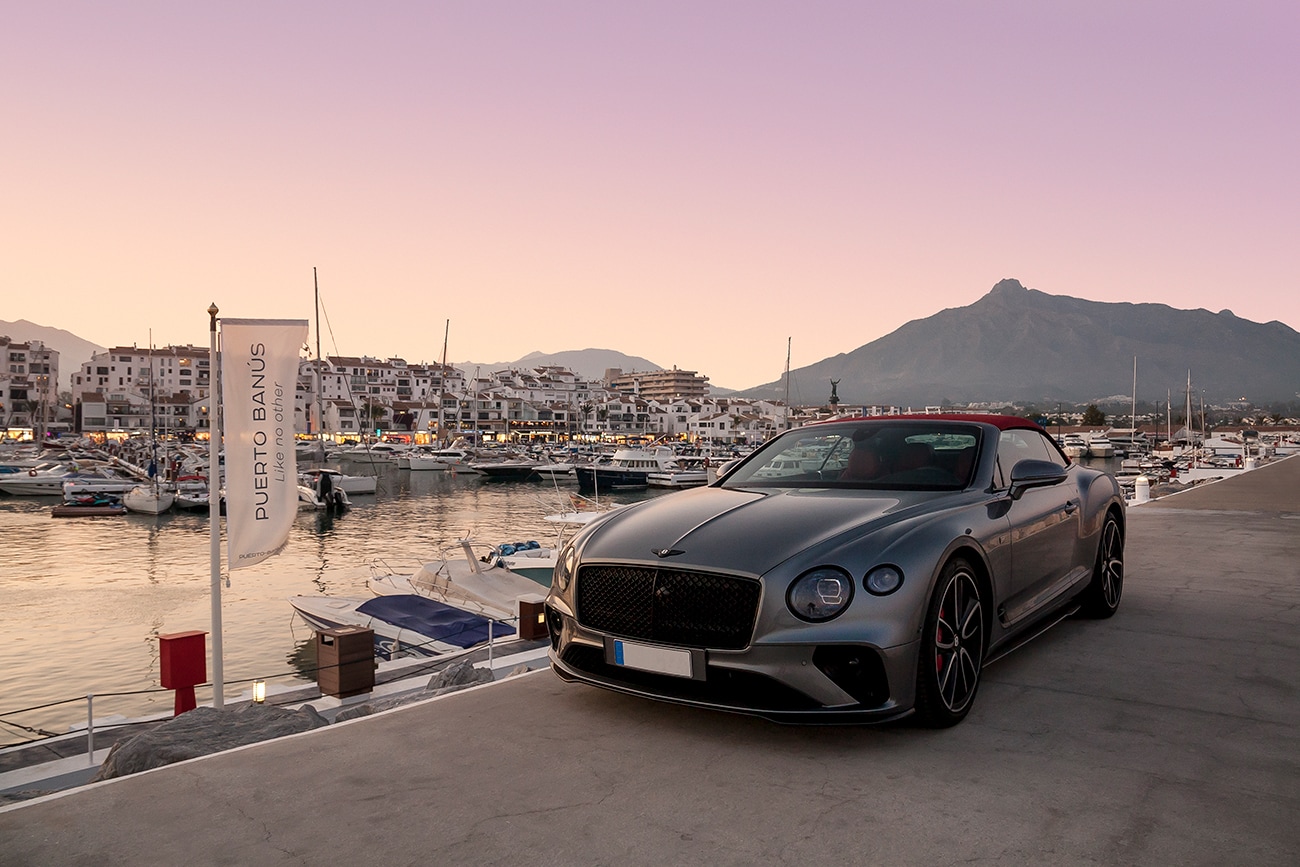 Since it opened in 1970 with a huge gala that saw Prince Rainer of Monaco, Princess Grace, the Aga Khan and Hugh Hefner attending, with waiters bussed in from Seville and a young Julio Iglesias performing for the VIPs, Puerto Banús has been a byword for the rich and famous.

The jet set marina was the place to be in the 70s and 80s. When a stroll along the front line from Salduba and Sinatra bar (where James Hunt could often be seen playing Backgammon) could see you bumping into celebrities such as Rod Stewart, Bjorn Borg or Sean Connery. Pre social media, The Port was the place where celebrities could let their hair down a little.

Puerto Banús has always been the place where the seriously wealthy have partied. Adnan Khashoggi’s super yacht Nabila – that appeared in the Bond Movie Never Say Never Again and was subsequently briefly owned by Donald Trump – was a frequent visitor – as was the late King Fahd’s super yacht Prince Abdulaziz, which was the largest private yacht in the world. More recently the super yacht of Microsoft main man Paul Allen was spotted floating off Banús, yours for a cool $300 million. And while many bemoan that Banús has lost some of its sparkle, the seriously wealthy still flock here in the summer months, as the supercars, superyachts and the occasional super model all testify! 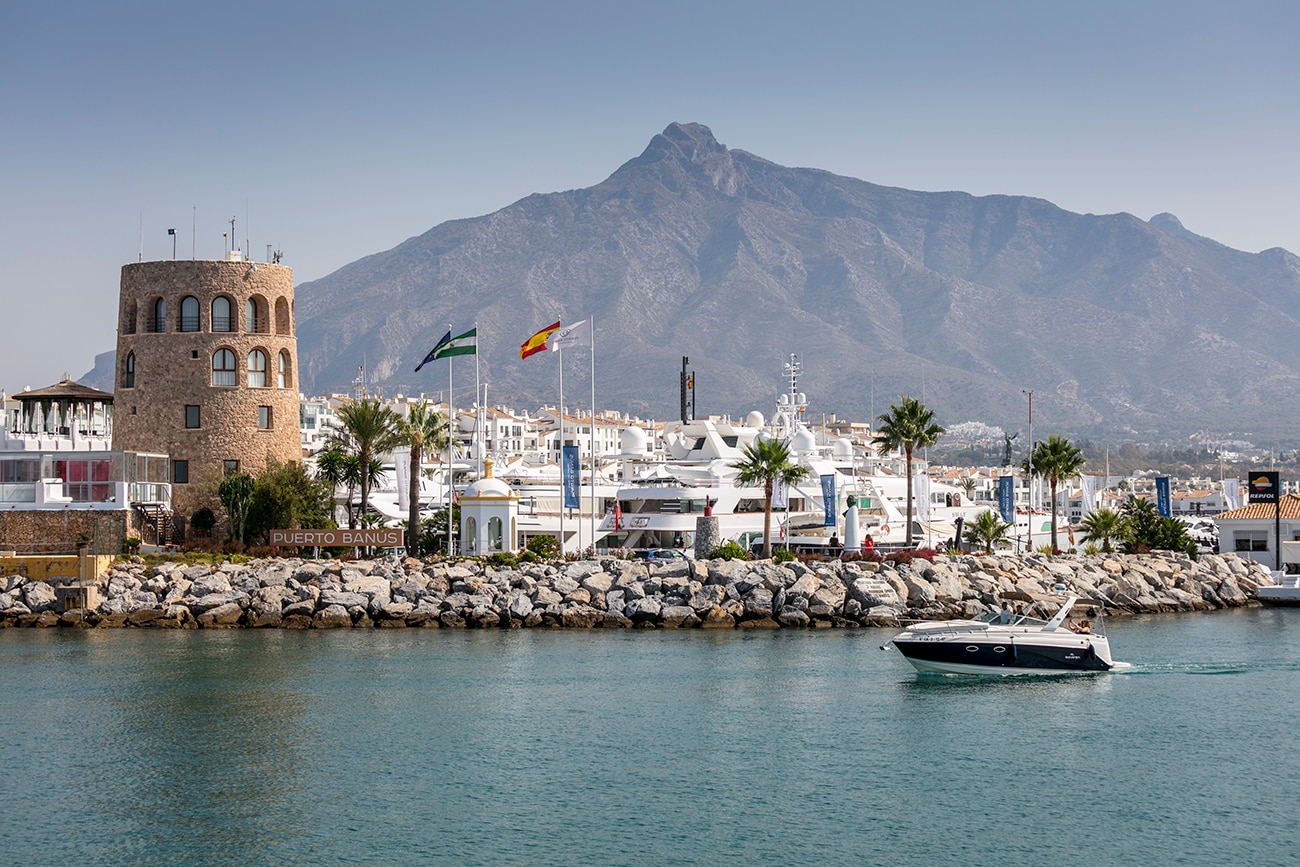 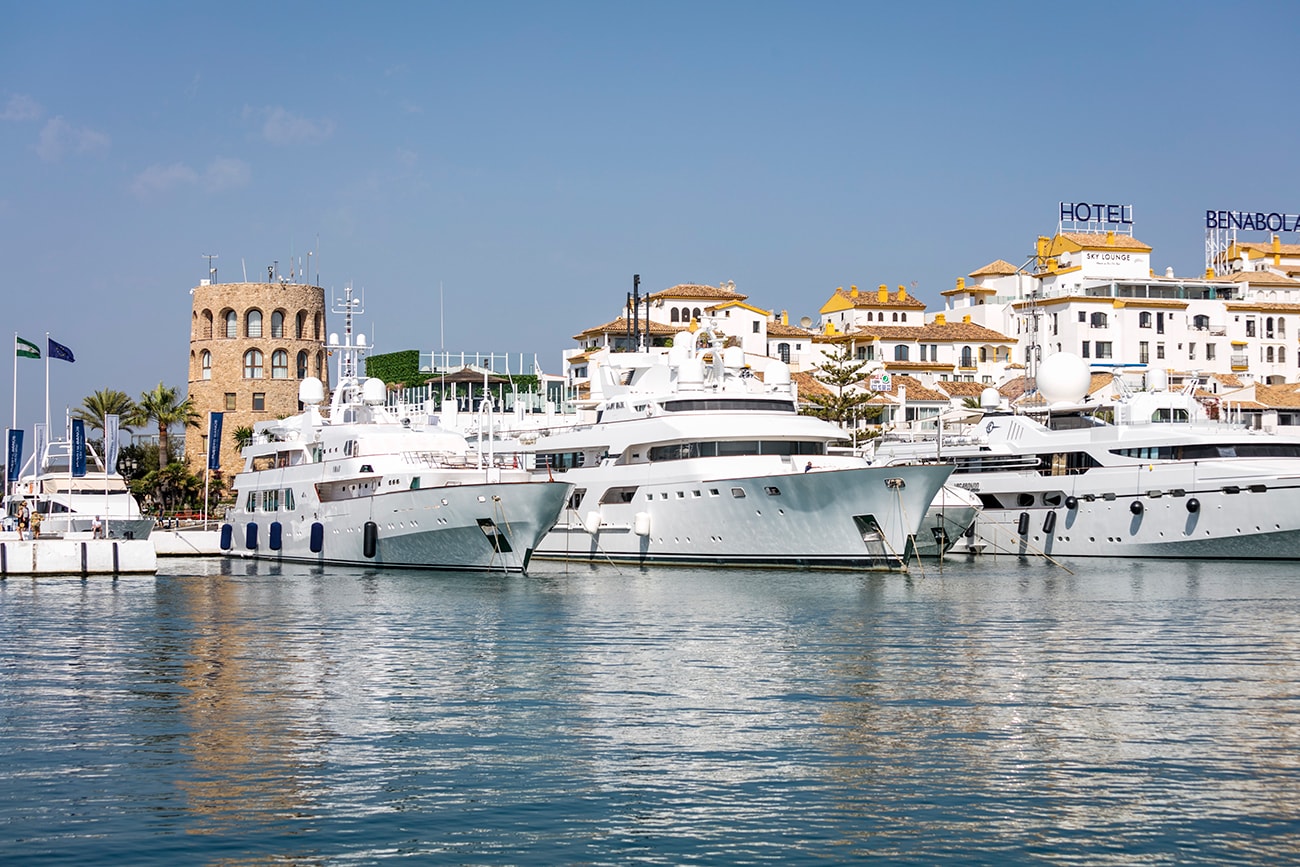 As the saying goes “Money talks – wealth whispers”, and nowhere is that truer than in Sotogrande. Beautifully maintained and with brightly coloured luxury apartments overlooking the marina, Sotogrande attracts “the right crowd and no crowding” and is popular with more serious sailors as well as the yacht fox girls. During the summer season Sotograndes’ bars and restaurants are busy with the well-heeled, who often combine a spot of sailing with popping over to the neighbouring polo fields, some of the best in Spain, and you can often spot a Spanish celebrity as well as the occasional visiting royal. (Prince Harry was known to visit in his bachelor days).

Located halfway between Estepona and Sotogrande, La Duquesa is an established marina that has a much more relaxed and family friendly feel to it. The marina itself is surrounded by reasonably priced restaurants and bars, where you could often spot the late great TV chef and renowned bon vivant Keith Floyd “unwinding”. The nearby town of Sabinillas has a busy Sunday market and it makes a great base for heading about to the acclaimed restaurants on the road to Casares and onward to Gaucín.

Very much a working marina, Estepona is one of the few places on the coast where you can watch fishing vessels return with their catch every day. Fishermen still mend their nets on the quayside, and you can rub shoulders with local chefs picking out the freshest fish for their restaurants at the market. Featuring a great variety of restaurant and nautical services, a lively nightlife scene and a popular tourist market, Estepona port is also just across from the town’s bullring, which has become a popular concert venue. When heavy metal legends Deep Purple played there, it was so loud that you could probably hear the music from four nautical miles offshore!

The Puerto Deportivo – not to be confused with the fishing port that can be found at the eastern end of the town, has undergone a dramatic renovation in recent years. Once home to some, ahem, “colourful” late night bars and clubs (that your author spent many years frequenting), the port has totally transformed itself into a busting tourist attraction.

Having pedestrianised most of the lower level of the port, Marbella is a perfect location for nautical competitions, regattas and sailing lessons for children and adults, as well as a scuba centre. It is structured on two levels: the “terraces of the port”, which often host events and shows, are on top and the stylish restaurants and bars and nautical facilities are below, along with the Yacht Club. 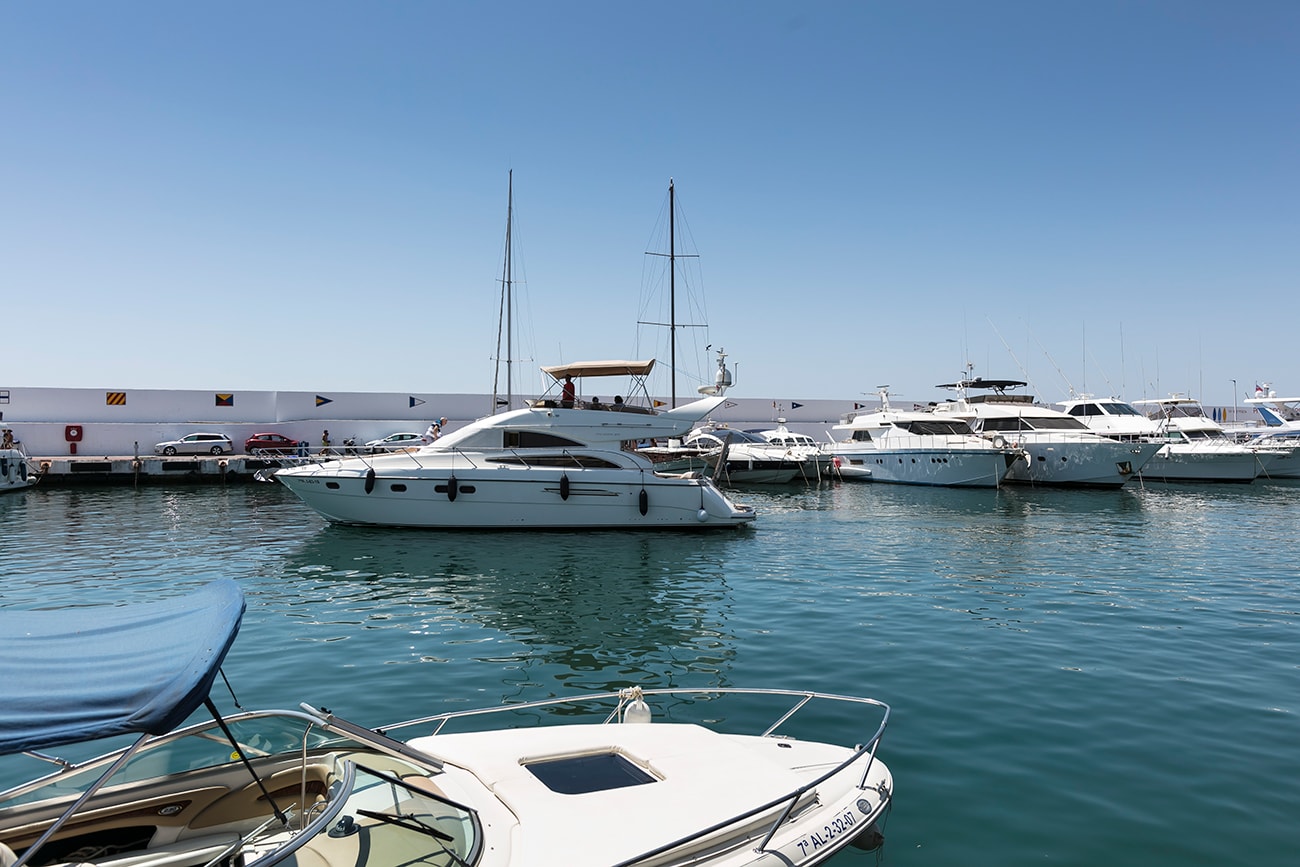 Small but perfectly formed, Marina Cabopino is located on the eastern fringes of the Marbella municipality. A well established and attractive facility, Cabopino is ideal for medium size boats and has excellent facilities for maintenance and repair, making it a popular location. As well as reasonably priced shops, bars and restaurants, Cabopino is set among beautiful pine forests and some of the best beaches in Marbella. Very family friendly – even the Beckhams where spotted there when their children where young!

Within easy reach of Málaga International Airport, Marina Benalmádena is the busiest and most attractive of the marinas in the area. Voted Best Marina in the World several times since it opened in the early 80s, the marina is always bustling with a huge array of bars and restaurants. Catering for boats of up to 6 metres in length, Puerto Marina Benalmádena is also the base for boat charter firms, dolphin safaris and day cruises. Keep your eyes peeled when you are there for a genuine super star. Málaga born actor Antonio Banderas is often around, enjoying time out on his brother’s yacht.

Whether you already own a boat that you’re thinking of relocating or you want to make a lifestyle change and get some luxury into your life, Marbella has plenty to offer in terms of boating infrastructure.